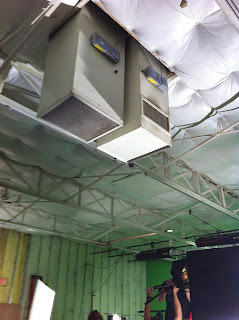 Today marks the 40th consecutive day that we've had temperatures of 100° F or higher here in Dallas.  Thankfully, today was a studio shoot, so no big deal...well, until I get into the studio.  It was one of those warehouse conversions that wasn't originally built with production in mind.  They had actually done a pretty good job of insulating the walls and ceiling, better than most for sure.  It was nice and cool, but the A/C was a unit mounted on the ceiling directly over our camera.  The first thing I was told when I arrived was that for the sake of the client and talent, the A/C needs be left on.  As a location sound mixer, you have two main jobs: 1) get good, clean audio and 2) make the client happy.  This was kind of a catch twenty-two, but certainly not the first one I've encountered.  After taking a keen listen to the ambiance, I determined that the amount of noise caused by the A/C would be insignificant with talent talking and the music to be laid underneath (thank God, cause it would be miserable otherwise).  There's no way I would've let us roll through the day if it were unusable, but it certainly wasn't the ideal scenario.  I once had a producer-friend of mine tell me that he had a guy one time that stopped an interview for every little frog fart.  Deciding what's acceptable and unacceptable is definitely the most subjective part of this job.  You just have to choose your battles so that you can win the war.

(NOTE: Today's title is also an homage to the 2010-2011 NBA Finals Champions, the Dallas Mavericks, who also "beat the Heat")