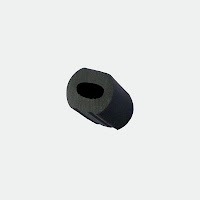 Back in March 2011, I reviewed a prototype of this mount for the Sanken COS-11.  There were several things I liked about it and a couple things I thought could be improved.  I'm glad to see that Percy Urgena at LMC Sound values the opinions of other mixers and actually listens.  This final version is somewhat flexible and appears to offer the ability to pinch the mount to insert the mic head and then release it to provide the tension that keeps it in place.  The biggest issue I had with the prototype was that it was very difficult to remove the mic head from the mount, and the final design appears to remedy that.  This looks like it will be a valuable tool in any mixer's bag and I would suggest picking a couple up.  Priced at $8.50 each, I think you'll definitely get your money's worth since they're reusable.  Also, look for the final version of the "C Mount" sometime very soon.  I had a chance to play with it as well and it could be a good tool if you have several different mics in your bag and are looking for a versatile mount.