From the Fanatics in New Mexico comes another beastly invention...the WXLR, a solar-powered wireless transmitter. Around this time every year it seems like these guys have something groundbreaking that hits the market.  Now that your show will save hundreds of dollars on batteries, you can get that raise you've been asking for! 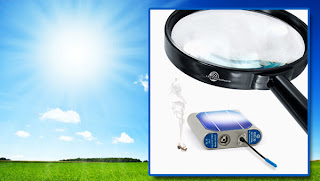 Rio Rancho, NM – April 1, 2013… Lectrosonics is introducing the world's first solar-powered wireless microphone transmitter, the WXLR. The new transmitter is based on the idea that today's solar cell technology is sufficiently advanced for use on portable electronic devices. The new WXLR was based initially on the previously introduced WM water-tight transmitter.

Being fanatics, Lectrosonics engineers aimed to simplify the design even further and make the housing even more bullet proof by eliminating the battery compartments and associated doors altogether. While discussing solar power as a potential option, one engineer realized that solar insolation is almost exactly 1 kW per square meter or 0.65 Watts per square inch in full sunlight. Solar insolation is the available power from the sun that strikes the earth's surface after atmospheric losses.