How To Find Your Mate

I was working a documentary about a specific mentoring camp for kids last week and ran into a couple interesting situations that I thought would be good to share. The bulk of our content took place in a venue that had a proper mult box for distribution of the house audio feed. However, there was another unforeseen event taking place in a different venue that we didn't scout, but were told had the same type of setup as the main venue. Well, guess what. [this is where you say, "What, Tyler!?"] It wasn't the same setup. Not even close. There was a PA system, sort of. They had a rack with two Shure wireless mic feeds sent to a shoddy mixer that produced a generous ground hum when plugged in directly. 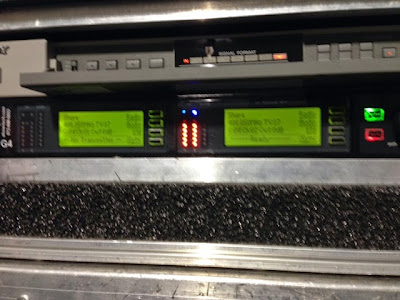 The event was already in progress by the time we got there; we didn't need the whole thing. I checked out the Shure rack they were using and noticed the frequencies they were using happened to lie within my Lectrosonics Block 19 range. I recall reading about the compatibility modes in the manual way back when and thought I'd try my chances at patching into the feeds directly. I changed my compatibility mode to "M.3" and VOILA! There those levels were in all their Shure-fired beauty. DISCLAIMER: I have never needed nor had the opportunity to test this out, so I was a little surprised that it actually worked as well as it did. It also turns out that it may have been an accident that occurs frequently (see below about what Lectro has to say regarding "Compatibility Modes"). So I ended up with a crystal clean feed of the audience handheld and the presenter lav. This is obviously a much better option since A) they are isolated and B) there's no ground hum.

Funny enough, a few days later we joined another one-man-band crew that was already shooting and wired up a key figure on a Sennheiser G2 system. And lucky me, it ended up being on a frequency in my Lectrosonics Block 21 range. I tried switching the compatibility mode to "M.3" again and VOILA! There it was again! Fancy that. Other than the fact that it sounded like a G2 talent transmitter, it was another option for post to use instead of my boom.

Lectrosonics says that M.3 is to be used for Sennheiser 3000 and 5000 series wireless. M.6 is designated for Shure UHF wireless and M.7 is designated for Audio Limited. They say it's not meant for picking up G2 or G3, but I got it this time so I guess it was my lucky day. They are essentially designed to digitally emulate the analog process of each respective brand, so I suppose that process isn't too different across models. If you're not trying, you're lying.

So two things you may have learned today...
1) Try your compat modes out
2) Diversify your wireless blocks

Good luck out there!